We are given a pcap file, so let’s open it up in Wireshark:

As can be seen, the entire pcap consists of USB packets. The overall structure of the file is something like:

Starting with the USB descriptors, there are 4 interesting string descriptors. The first one indicates that the language is English, and the other three contain the messages “Manufacturer is confidential”, “and so is product string”, and “not to mention serial number”. What do these messages mean? Looking at the device descriptor (in packet #2) gives us the answer: 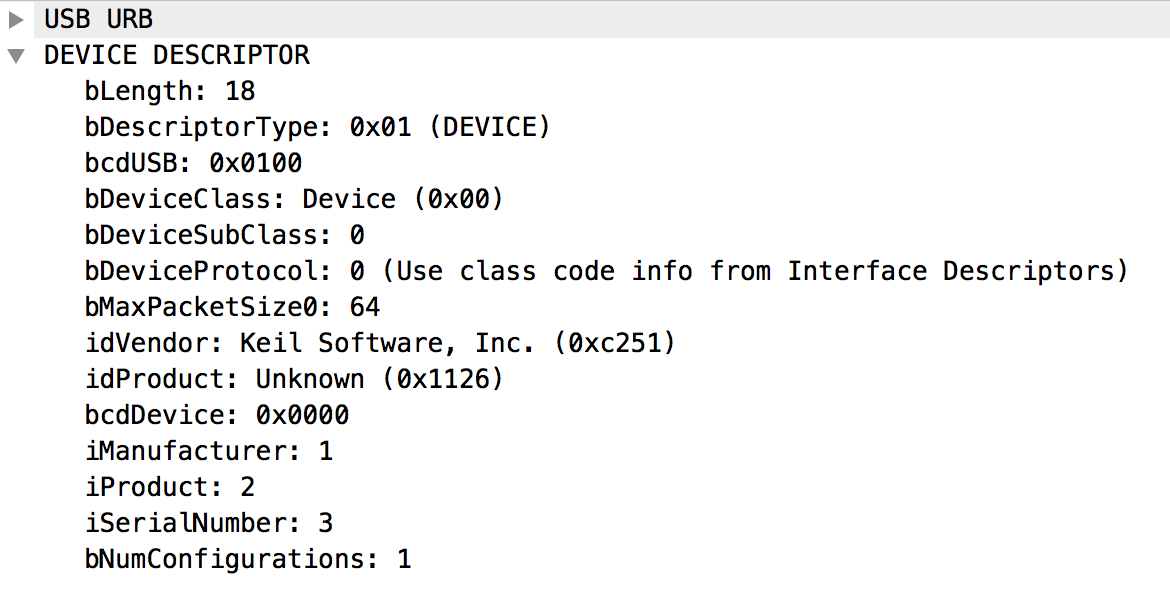 As we can see, the manufacturer, product, and serial number are simply 1, 2, and 3, which I imagine are not real values. However, it looks like we still have some information about the device, namely the idVendor and idProduct. Putting idvendor=c251 idproduct=1126 into Google takes us to this link, which is part of brltty, a program that helps display Unix console text on refreshable Braille displays. This means that the USB device is likely a Braille display (and the challenge title makes a lot of sense now!).

We’re now pretty sure that the SET_REPORT requests contain data that somehow indicates which dots are raised on the Braille display. So now, all we need to do is figure out how the data corresponds to Braille dots.

Unfortunately, this turned out to be a lot harder than we first thought. Googling things like USB Braille specification gave us a bunch of news articles about a new USB Braille standard that was supposedly released a month ago, but we couldn’t find the specifications anywhere (and presumably this device is way older than a month anyways). We also couldn’t find any helpful information on the official USB website which was kind of unfortunate.

At some point, we decided to look at the brltty codebase, thinking that we could find the driver for our Braille display and read the code to figure out how Braille data was represented. From some searching, we found out that the vendor and product number corresponded to the Eurobraille Esys device, and got the corresponding driver code, but none of us were able to understand enough of it for it to be of any use.

At the same time, some of us tried to reverse engineer how to convert packet data to Braille by just looking at the data directly and trying to make the “CTF” letters. The first few SET_REPORT packets had the following hex data:

As you can see, between consecutive packets, the data barely changes, while gradually growing over time. This feels like it could correspond to dots on a Braille display popping up from left to right. Assuming that this is the case, the final SET_REPORT packet should contain the whole flag represented in Braille somehow:

A couple of clarifications, to be precise:

We looked the bits of the “0200544253…” strings and tried manipulating them somehow to get valid Braille characters but weren’t having much luck.

However, while combing through the brltty codebase, we found this comment that explained how the dots on an 8-dot Braille display matched to bits (apparently this is fairly standard). If each 8-dot Braille character directly matched to a byte in the packet data in this manner, then we’d be able to decode it. Of course, it’s possible that the data might be compressed or encrypted in some way before being sent over the network, but in the end our wishful thinking worked out and the flag was indeed directly encoded in this manner.

Here is the above hex string represented in binary, ending with the c0:

In 8-dot Braille, the character “C” is generally written as the normal 6-dot Braille “C”, with the lower-left dot also filled in to indicate capitalization. That is, it looks like

where O’s represent raised dots. Combined with the dots to bits mapping given above

This is indeed a capital “T”! We can continue decoding the rest of the characters* to get the flag, CTF{h1de_and_s33k}.

*During the actual CTF, we had a little trouble with the decoding because we couldn’t find a standardized canonical 8-dot Braille alphabet other than with the letters. So we actually ended up extracting CTF{h?de?and? before guessing that the flag would be some variation on “hide and seek”. Our first guess, CTF{h1de_and_seek}, was not correct, but we then replaced the “e”s with “3”s and that worked. 😛