The description of this challenge is: “We’ve found this priceless, old magnetic tape in our archives. We dumped the contents, but the data is corrupted and we can’t read it. We only have this old tape reader tool, but source code was lost long ago. The program has only 944 bytes, so reversing it should be trivial, right?”

Playing around with the tape reader

We’re given two files: “FLAGZ.DAT”, which contains binary data (and is presumably the tape mentioned in the description), and “tapereader”, a stripped ELF file.

First, we can just directly run tapereader on FLAGZ.DAT and see what happens. We used QEMU because tapereader uses the ARM architecture; running cat FLAGZ.DAT | qemu-arm tapereader prints out the following: 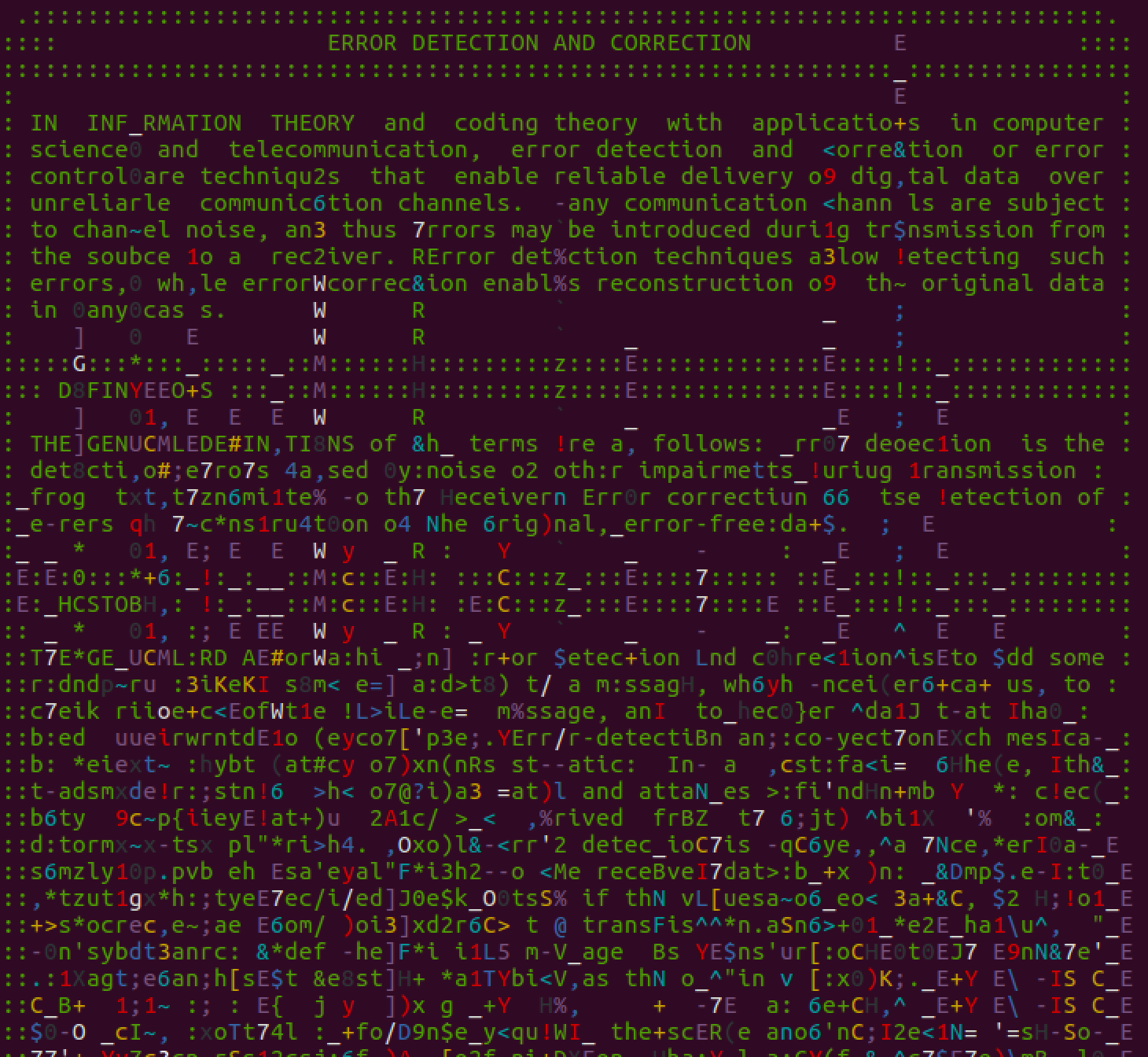 Well, this tape is certainly corrupted! There is also a message at the bottom saying that there were “checksum errors”:

This implies that the tapereader binary somehow computes checksums from the tape data, and that if we can fix all the errors in the tape to make all the checksums work out, then the flag should hopefully be readable. One interesting observation here is that once an error occurs somewhere, all of the characters below it in the column also have errors, which implies that fixing a character should also fix the rest of the column (at least up to the next error). Also, all of the text seems to be taken directly from the Wikipedia article on Error detection and correction so it seems like it’ll be pretty easy to determine the plaintext. Let’s take a look at how the data in FLAGZ.DAT is represented: 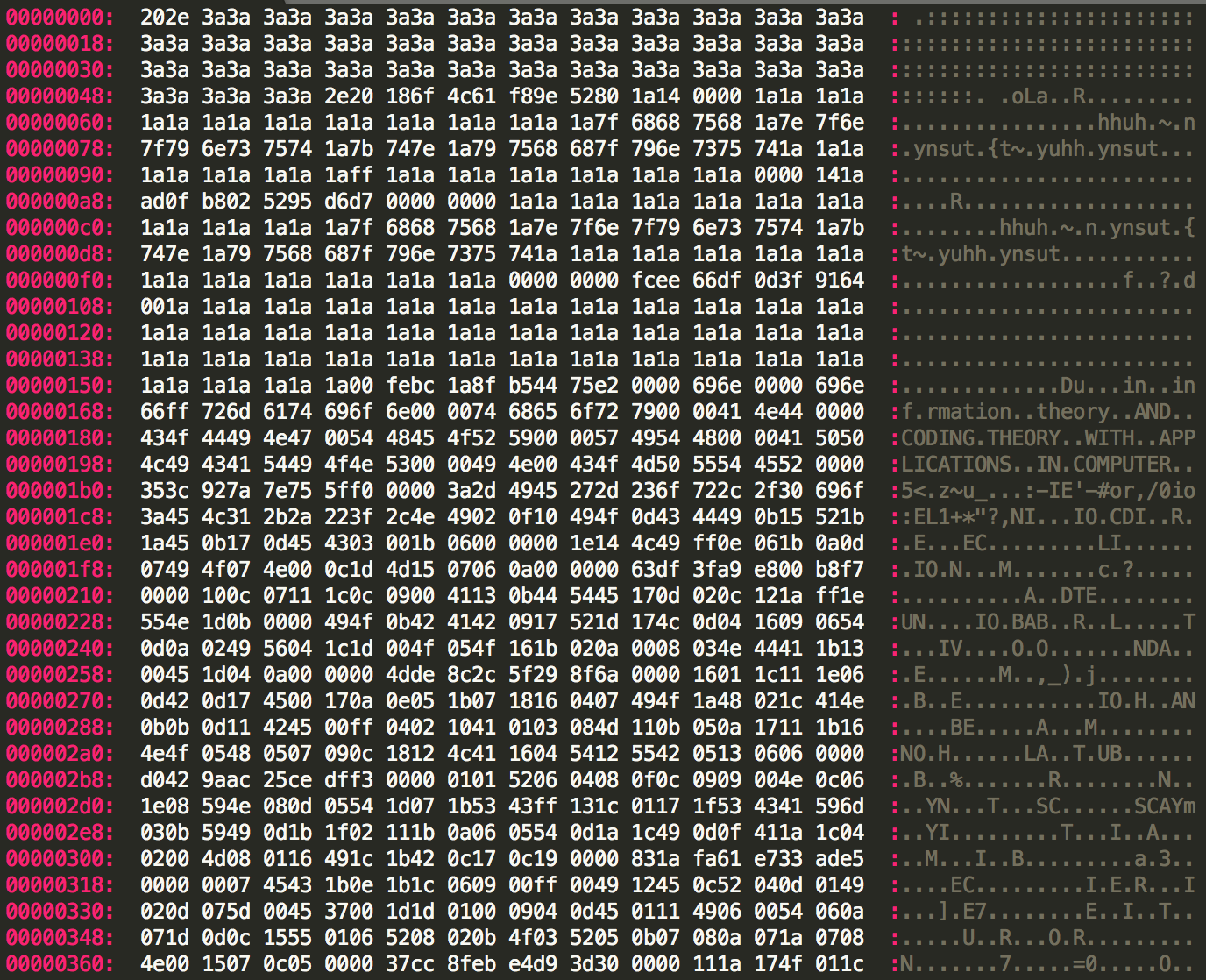 As we can see, the first 80 characters of this file exactly match the first line of the tape reader output (each line is 80 characters long). Later on in the file we can make out some words, but nothing else seems to match exactly. However, there are a bunch of 1a bytes shortly after the first line which seem to correspond to the spaces in the second line, which makes the 7f68687568 correspond to ERROR (and a bunch of other characters correspond to the remaining DETECTION AND CORRECTION). What transformation turns 1a to space and 7f68687568 to ERROR? One of the most obvious things to try is XORing, and it turns out that XORing all of these bytes with 3a gives the desired characters.

Also, 3a corresponds to the character :, which is interestingly the same character in the first line! From here, it’s not too hard to guess and verify that the tape reader simply XORs a given character in the file with all of the characters above it in the same column to make the displayed character. This also completely explains the “an error propagates down the column” behavior mentioned earlier. Some other notes:

At this point in the challenge, we were feeling pretty good about ourselves. Now that we knew exactly how the tape data corresponded to the displayed characters, we could just turn all of the FFs into the bytes that will make the text match that on the Wikipedia page. There were only 190 such corrupted bytes, so we wrote a script to aid in manually displaying the corrupted bytes and entering the correct ones. We started patting ourselves on the back as we were certain we would get the flag without even needing to reverse the tape reader, when we reached the bottom and were punished for our hubris:

(zooming in on the corrupted bytes in the hexdump) 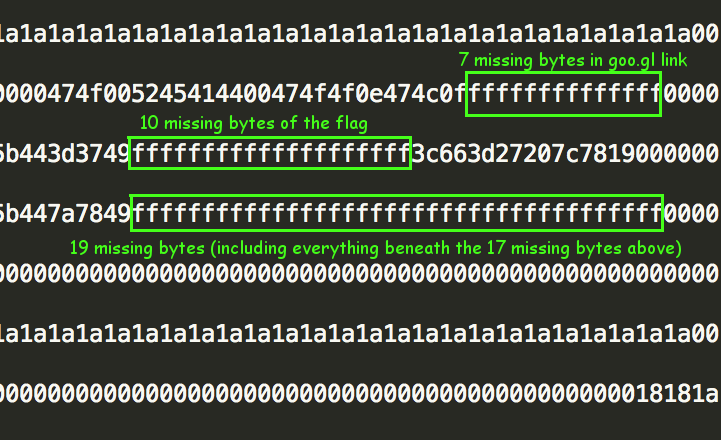 At this point, we spent a while trying to use various black box methods of guessing the characters because no one wanted to actually reverse the ELF file. We tried things like brute-forcing and checking the number of green characters in the result (assuming that green is generally good), or writing a script to check whether a certain goo.gl link went to the relevant Wikipedia page, but in the end the fact remained that brute-forcing 6-7 characters of the goo.gl link was really hard, and there was absolutly no way we could brute-force 10 bytes of the flag. Eventually, we decided to bite the bullet and start looking at the tape reader so we could figure out how the checksum was computed.

The first and biggest obstacle was that none of us were familiar with the ARM architecture, so we spent quite a bit of time reading up on how it works. We found the documents here and here (the “Introduction to ARM Assembly” section) both quite helpful. If you’re not that familiar with ARM, it would probably be useful to read up on the basics before continuing, though I will try to explain the relevant parts as they come up.

Anyways, let’s open this up in IDA. Here’s the start of the file: 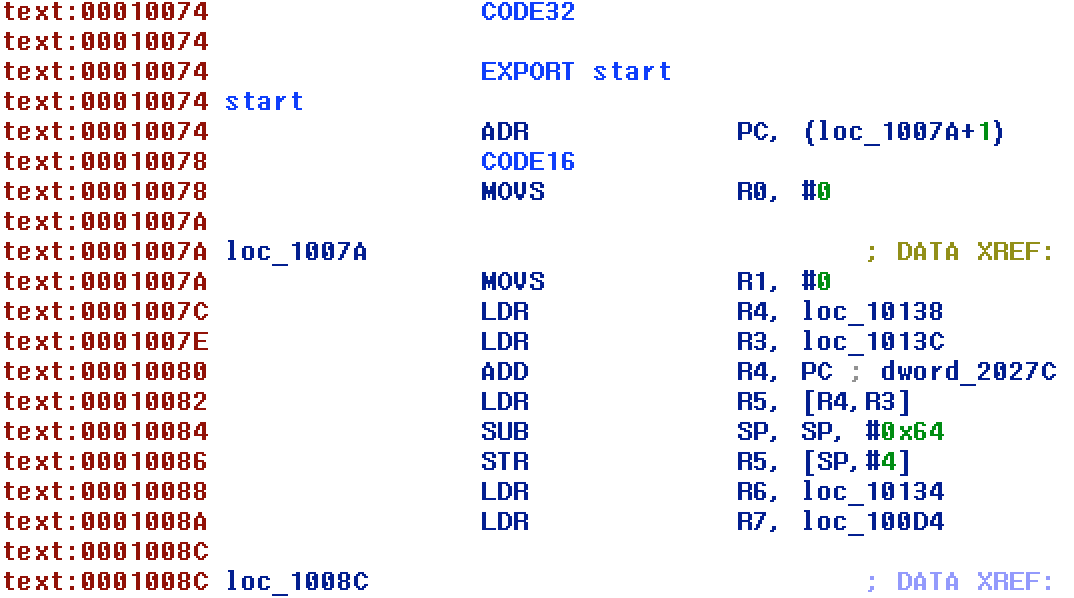 The very first instruction moves an odd address into the program counter, which changes execution from ARM to Thumb mode, which is basically a more compact instruction set where each instruction is 16 bits instead of ARM’s 32 bits. It seems like IDA can’t really tell which parts are Thumb and which parts are ARM, so you have to use the “change segment register value” command (keyboard shortcut Alt-G) to set it manually.

After that, we can pretty easily follow the next instructions, which loads values from the middle of the file into registers, eventually setting R5 to 0x202f0, an address in the middle of the BSS section, and putting it on the stack at SP+4. It then loads the values 0xd7870f42 and 0xc96c5795 into R6 and R7. After this comes a loop: 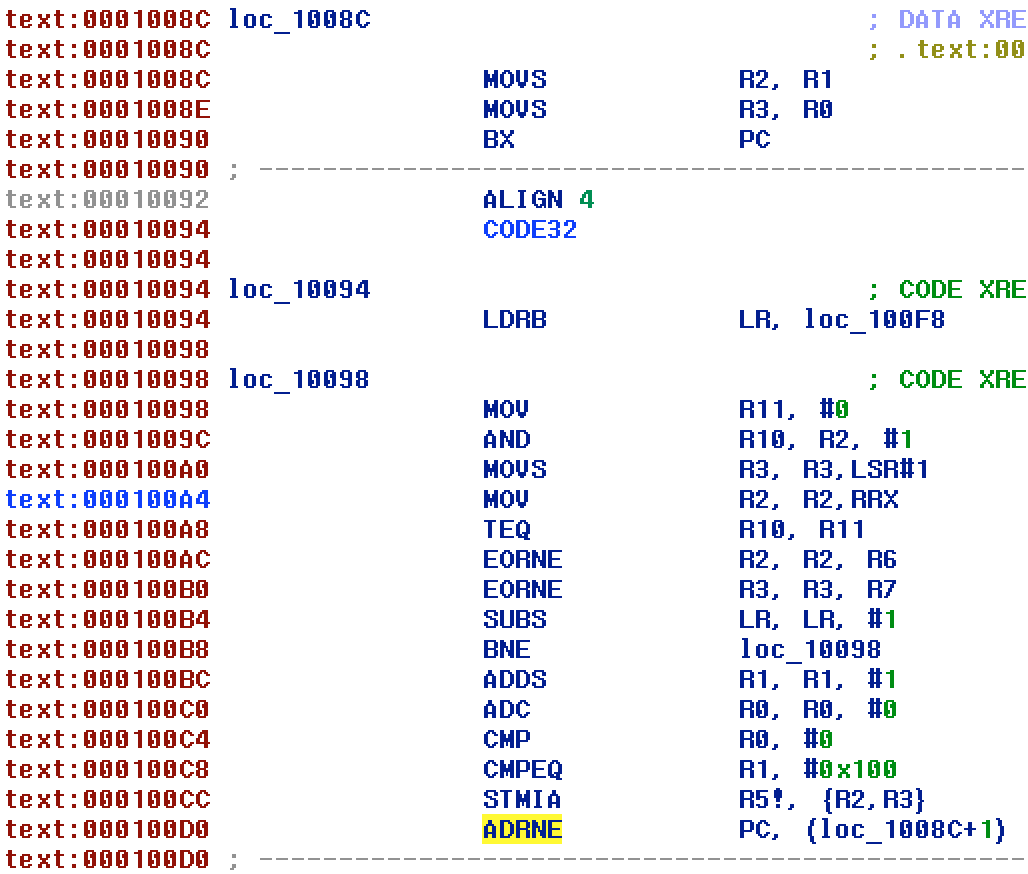 Some notes on what this does:

After this loop comes the part of the code that reads in the tape file. We never ended up figuring out how this part worked because we had lots of trouble understanding ARM supervisor calls. However, we were able to skip it and just go the part of the program that was computing the checksum, at 0x10178 (thankfully, 944 bytes of code is a manageable amount so it wasn’t too hard to find): 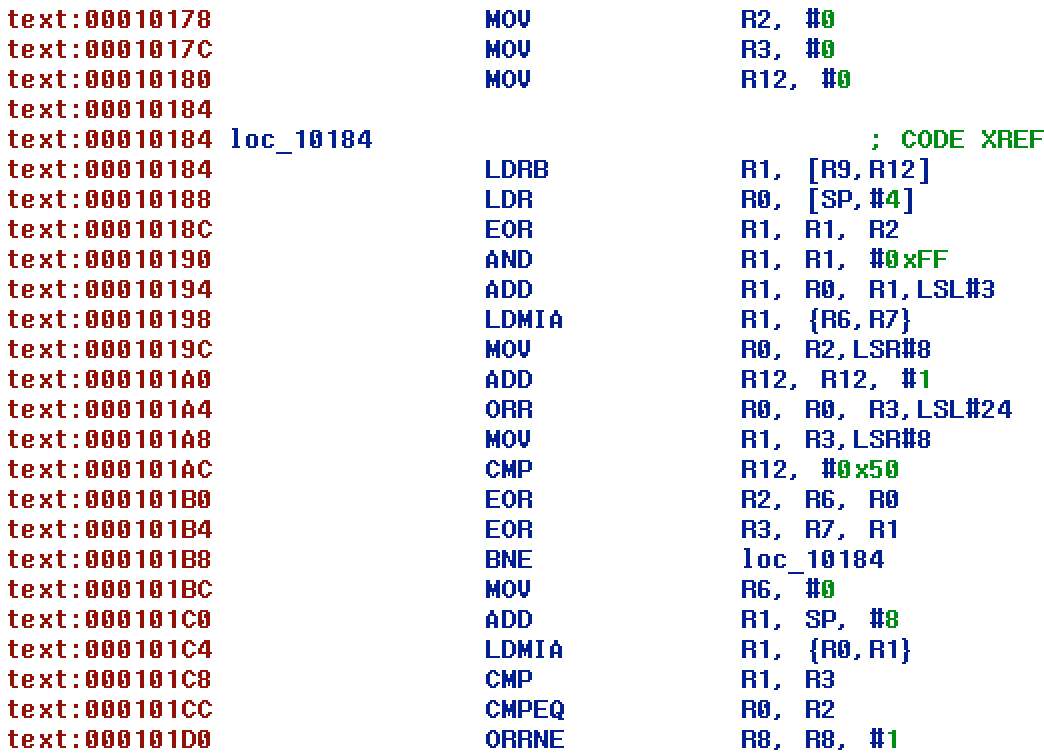 Some notes on what this does:

Finally, this took us a while to notice, but the weird shifts in 0x10194-0x101a8 are a lot more understandable if, instead of considering R2 and R3 as two separate parts of a checksum, we actually consider it as a single 64-bit number, with R2 being the 4 low bytes and R3 being the 4 high bytes (basically, this program is implementing 64-bit integers in a 32-bit architecture). Below is a step-by-step visualization of this, where R2[3] through R2[0] represent the 4 bytes of R2 from most to least significant (same with R3), and R6 is shorthand for R6[3] R6[2] R6[1] R6[0] (same for R7).

As we can see, the 64-bit checksum simply ends up being shifted 8 bits right and XOR-ed with another 64-bit integer. To sum it all up, here is the overall checksum algorithm:

Edited to add: as pointed out in the comments, this is actually just the CRC algorithm specified here, and the polynomial is the same as that of CRC-64-ECMA.

Figuring out the corrupted bytes

To recap, we now know exactly how the checksum algorithm works, and we want to fill in 7 missing characters of a line so that the resulting checksum matches some given checksum (and the same thing with 10 missing characters in the next line). Luckily, most of the hard work is behind us and the rest of it turns out to be a fairly straightforward math/crypto problem.

Because the checksum is computed one step at a time, one potential idea is using some meet-in-the-middle attack to brute-force the missing bytes. Let’s assume that the checksum function is reversible (i.e. right now, given a checksum and a character, we can compute the next checksum, so let’s assume that given the “next checksum” and a character, we can go backwards and compute the previous checksum). Then we could use the following strategy when there are 10 missing charcters:

This strategy would require computing and comparing around 2×625≈2 billion intermediate checksums, which is definitely feasible in a language like C++. So, all that’s left is figuring out how to step backwards in the checksum function. Let’s take a look at the checksum algorithm again, in pseudocode.

If we want to go backwards, then we need to determine what number was selected from the table. How can we determine that given the final checksum? One observation is that the first byte of the return value, (current_checksum >> 8) ^ x, is also the first byte of x. So we could implement the reverse function like this:

Of course, this would only work if there were a unique table[i] for each of the 256 possible first_bytes, but luckily for us, this turns out to be the case. There is almost certainly some mathematical reason why the values generated by make_table all have distinct first bytes, because it would be too big of a coincidence otherwise, but we haven’t thought too much about it (and it’s not important to solving the challenge anyways).

Here is the script we wrote to implement the meet-in-the-middle attack, cleaned up a little and commented:

Note that we actually first figured out the missing 7 characters in the goo.gl line by brute-forcing 4 and 3 characters on either side, so I’ve left in some of that as comments in case you want to try running it yourself. We need to know these 7 characters before we can determine the missing 10 characters in the next line. (it turned out to be goo.gl/hsy11d, which does indeed link to the same Wikipedia article the rest of the text is from)

We also had a bit of trouble running this script at first because our laptop only had 8 GB of RAM and storing a billion 64-bit integers needs a little more than that. Luckily, we had a teammate with access to a machine with around 100 gigs, so we were able to run it on that. It ended up taking a very reasonable ~10 minutes, and did indeed print out the 10 missing characters we needed to complete the flag, which was CTF{dZXicOXLaMumrTPIUTYMI}.